Welcome to the Cowgill Cousins home page. This site is free of charge and has no advertising. Please provide a proper citation to the Cowgill Cousins and this website for any use of the data posted hereon. We expressly and emphatically prohibit the sale of this data whether for profit or not. If membership or fees are required to access your data, do not add research from this site to your files. Thank you. The Cowgill Cousins is an organization founded to promote the research, preservation, and free exchange of information on our Cowgill heritage, as well as to provide opportunities for members and interested others to meet and greet people in the extended Cowgill family. We also sponsor an active DNA program. The organization was established in 1982 at a reunion in Kansas City held to mark the 300th anniversary of the arrival of Cowgill's in America. Meetings are held biannually in odd numbered years at varying locations (next meeting in June 2011 - see below). Members dues support selected organization activities, and include a subscription to the Cowgill Cousins Newsletter published periodically to inform members of news or events of special interest. While the membership to date has been almost exclusively from America, we welcome and encourage our "cousins" from elsewhere to join us. (See Join Cowgill Cousins).
The primary goals of this site are to assist those researching their Cowgill roots by providing pertinent information already gathered, coordinate ongoing research to preclude duplication of effort, and assistance in any new research required (to post or view a query see Queries). A long term goal is to build a complete, worldwide family tree (a Cowgill "one-name study") from the earliest known individuals through the early 1900s (limited by privacy concerns), in a searchable data base available free. We are registered with the Guild of One-Name Studies for the surname Cowgill and its variants. Most of the research included herein was sponsored by the Cowgill Cousins as a cooperative effort. If you are a Cowgill family researcher or just someone with information to contribute, please contact us.

What's inside this site:
What's on this page:

Whence Cowgill? There are a number of ancient places, all in West Yorkshire, named Cowgill or Cow Gill. The most likely source of the Cowgill surname appears to be the Cowgill House and Cow Gill Cote (a cote was a smaller dwelling than a house) located near Bordley in Burnsall parish, West Yorkshire. The photo above is of Cow Gill Cote, which still exists and is now used to house animals; Cowgill House is not precisely located, but may be at Lee Gate Farm which is located across Cow Gill from the cote. These place names appear as early as the mid-1400s in records of Fountains Abbey, which held Cow Gill Cote as a grange or sheep station in the Middle Ages as a source of income. The Cowgill settlements are likely to be much older than the records suggest, and evidence from the surname indicates that they are likely to have been established well before 1350. They both owed their name to a stream which runs below Cow Gill Cote which is still named Cow Gill (a gill is a small ravine) on UK Ordnance Survey maps. Field names have ancient history. Near the gill in Bordley is a field named Cowgill.

The earliest known references to Cowgill individuals were several families in the general area of Bordley and one in nearby Ilkley parish listed as “de Colgyll” on a tax list of 1379, and as Colgill by 1458. From 1522 the name regularly appears near there as Cowgill. By 1600 there appeared to be two distinct Cowgill family groups, one centered near Thornton in Craven and the other near Ilkley (see sketchmap below). The family remained largely in West Yorkshire and neighboring Lancashire through the 1700s, with the major exception of one family that left for America in 1682. Cowgills were in Jamaica by the late 1700s, appeared early (by 1810) in Australia, and were in Canada by the mid to late 1800s. (Excerpted from information on the origin and distribution of the Cowgill surname prepared by Dr George Redmonds, and reprinted with his permission, as Tour Itinerary Notes especially for a Cowgill Cousins group tour of West Yorkshire in 2006.)

The Cowgill surname now has several variants. Since some earlier descendents were likely illiterate, officials listing them on documents such as parish, tax, military, and census records changed the spelling to what they heard or were familiar with. Also, some lines may have deliberately changed the spelling for their own reasons. In conducting research it is necessary to check on variant spellings and mispellings, but also to check that the individuals listed are in fact Cowgills and not another family (even some listed with the spelling "Cowgill" are in fact other families). Following is a listing of the primary known variants, omitting the occasional mispelling, who are truly Cowgills. Those marked with an asterisk have migrated to a surname spelling that is known to belong to a separate, unrelated family group; those marked with a double asterisk are thought to be Cowgills but no definite tie-in has been proven to date: Cowgell, Coguill, Cogil(l)*, Cougill*, Cogle*, Coggill, Coghill*, Cowdill, Cowdell, Coughil, Choguill**, Cowguill**.

Q: What is the proper pronunciation of Cowgill? A: There is none. The name arose in an area of Scandinavian settlement in the 10th century, and the early spellings seem likely to represent the old NORSE personal name of KOLLI plus the old Norse word for GIL, i.e., Kollisgill. The L of Colgill was vocalised in both the placenames and the surname in the tudor period, and this is a feature of the local speech. The words 'old' and 'cold', for example are pronounced 'owd' and 'cowd'. The name has, therefore, nothing to do with cows, except by association, and the forms quoted show that the surname could not have developed from other places now called Cowgill which are, in fact, derived from the word 'cow'. Note that some current British families use Cow-Gill, while the variant spellings mentioned above indicate other pronunciations. Take your pick. 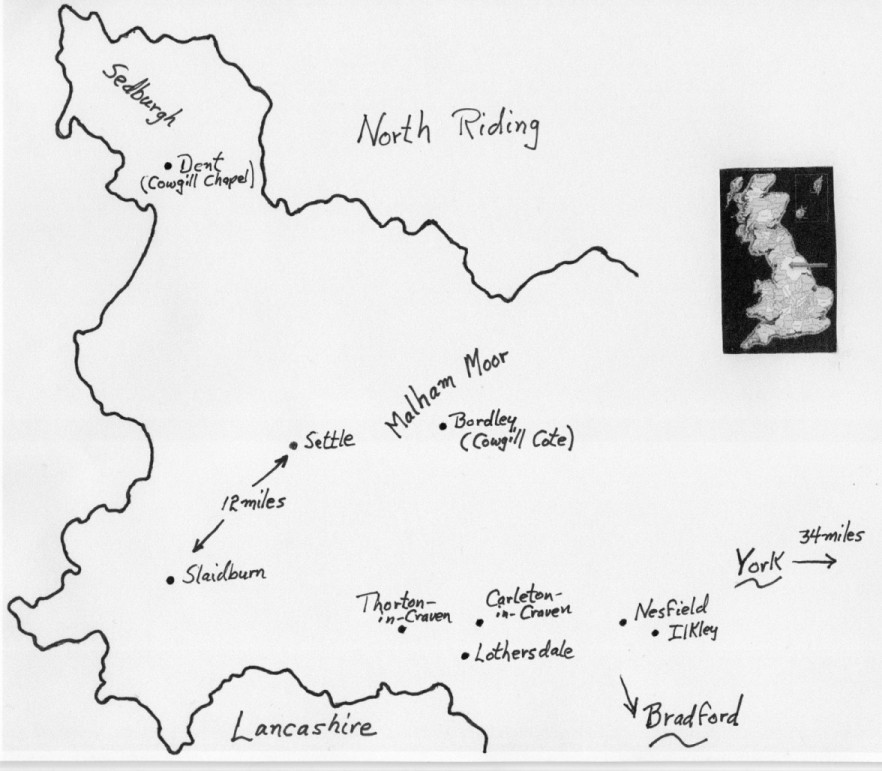 The following are some selected important early events in Cowgill history:

Q: Did the Cowgills have a family coat of arms or official family crest? A: No, none could probably afford one. Those being sold by so-called heritage organizations are bogus.

Note: each page on this site can be searched for a known date, place or name using your browser's Edit - Find functions.

This site is lovingly dedicated to the memory of